The rest of this decade will see the evolution of the network of all networks: the Internet of Things. It will contain not only all the devices hooked up to the current internet but millions of other devices from monitors to sensor devices; a vast spread of telematics and technology.

All this will develop in parallel with our increasing dependence on mobile networks sending and receiving multiple terabytes of data to and from our mobiles as we’re out in the real world. So what’s all this going to hang off? The answer is a 5G mobile network.

“5G wireless will, first of all, open the frontiers of a new end-user experience. For example, visual communication will become the mainstream, and people will use wireless devices to interact instantly with people remotely, as if they were meeting face-to-face. 5G wireless will also wirelessly connect an enormous number of “things” to the network. “Therefore, in combination with cloud computing and Big Data technologies, we can essentially automate the entire society,”

5G The Future of Mobile Communications

A Vision of 5G

There has been lots of impressive progress by big telecoms players in their 5G Research & Development, but 5th Generation Mobile Technology still doesn’t exist yet which makes it difficult to describe.

The best approach to getting an idea of what it’ll look like will be considering the technological and commercial needs it must satisfy.

The major driver in 5G’s development will be a consumer expectation that future mobile telephony will have the same functionality and service quality as their laptop or desktop.

At the same time industry and households will depend increasingly on M2M or Machine-to-Machine communication and the Internet of Things to automate routine tasks and functions.

This means 5G will have to handle data flows many orders of magnitude greater than today’s volumes. In a recent white paper, NTT DOCOMO, Japan’s largest mobile service provider, predicts that mobile data traffic could increase 1,000-fold by 2020 compared to 2010.

Faster data rates will also be a must for 5G. Consumers will expect it to support High Resolution Video Streaming, Augmented Reality and Media Dense Social Networking.

Closely related to this increased data rate must be greater uniformity in the quality of user experience or QoE. Again, NTT DOCOMO have set the benchmark with a uniform 1Gbps rate accessible everywhere and a 10-fold increase in the current peak rate. For users this could mean downloading a movie in a matter of seconds as opposed to top speeds for 4G LTE of 1 minute.

Also, 5G will have to support an estimated 100-fold increase in the quantity of simultaneous connections compared to the latest wireless technology deployed (LTE or Long Term Evolution).

Latency will have to be drastically reduced in 5G. NTT DOCOMO’s target is a 1ms latency over the RAN or Radio Access Network, compared to LTE which is 5ms. This will offer mobile networks an effective zero latency thereby offering a range of opportunities for many industries.

Ultimately, 5G will have to support a network that has to work an awful lot harder than the current networks, it must be more robust and offer greater efficiency which means built-in cost controllers.

Some mobile services will be data intensive like video streaming and others will be data-lite, such as data-packets coming from monitors and sensors in the IoT.

And of course this traffic will vary wildly with location: shopping centres and financial centres will have inflows and outflows of data that are huge compared to say an out of town suburb. So it needs to be responsive to these variations.

The Progress of 5G so Far

The new 5G technology really won’t be deployed before 2020. But public and private players the world over are investing heavily in its development. The EU Commission has launched a public private partnership in December 2013 with leading European telecoms firms. It’s called the 5G Infrastructure Public-Private Partnership or 5G PPP. The Commission will invest €700m in 5G R&D from 2013 until its going live date which is expected to be in 2020.

This year Brussels signed a Strategic Cooperation Alliance with South Korea that covers 5G and other new technologies like cloud computing. The aim will be to facilitate co-operation between tech companies in the EU with South Korean telecoms firms.

The aim of the partnership will be to give European tech companies a leading role in 5G and the spin off technologies and markets. The video below sets out the benefits to users of 5G technology.

But on the ground engineers have already made progress in actually developing 5G. A lot of this has been in the area of varying data speeds.

Samsung made a breakthrough last October. They created a data transfer speed that far exceeds anything currently on the market, achieving an industry first with 1.2 Gbps 5G connection while travelling 100km/h. This test was conducted outside the lab in a real world setting. Samsung also made progress with a 940MB per second connection while stationary.

What made these results impressive was that for the first time engineers were using higher frequencies like  28GHz. Previously, they weren’t used because their range was far too short. But in a press release Samsung say they overcame this limitation using their Hybrid Adaptive Array Technology. This utilises “millimetre wave frequency bands” to extend the limited reach of these radio frequencies.

This recent Samsung achievement was a sevenfold increase on their results in May 2013, when they achieved data speeds of 1Gbps over a 28GHz 5G network. 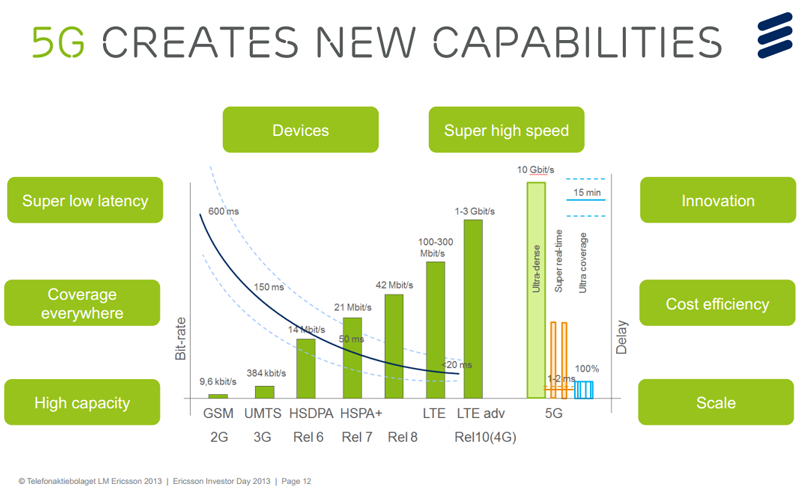 NTT Docomo achieved comparable high speed data transfers as well but they have yet to run 5G tests outside the lab environment. They plan to do this next year with partners Alcatel-Lucent, Ericsson, Fujitsu, NEC, Nokia and Samsung.

Ericsson has also impressed the telecoms world : back in July this year  they achieved a “live, over-the-air demonstration of Ericsson pre-standard 5G technology achieves 5 Gbps throughput .” This was in the 15 GHz frequency band.

Interestingly, from the graphic above they sketched out what 5G will look like and it will bear a strong resemblance to the current mobile technology stack. The 5G vision will include lots of radical new technologies but it will be incremental change, not revolutionary.

5G The Future of Mobile

For example, the Retail sector will be able to personalise services in real-time to shoppers using localisation & proximity services, offering greater brand loyalty from consumers; within the Automotive sector, we may well be using driverless cars allowing the vehicle to download real-time traffic updates, providing a safer and more efficient form of road travel.

Within the Health sector, wearable devices (which we wrote about here and here) have the ability to become remote sensors, providing diagnostics and assisting with patient care.

The Insurance industry could introduce a “pay as you drive” model. Security, Freight, Entertainment & Media, Surveillance, Emergency Services, Transport, Utilities, the list goes on and on. And there will undoubtedly be new services in 10-15 years that we have not even begun to think about. The future is bright – the future is 5G.