They allow applications to connect and become interoperable and data to flow unimpeded. In turn enabling software platforms and their services to scale globally.

But this promise of global interoperability is now in doubt after last May’s US Supreme Court decision to reject Google’s appeal against a previous court decision that found in favour of Oracle’s 5 year Intellectual Property action against the Giant search engine.

The quarrel is about Google’s use of Oracle’s Java APIs as the basis of their Android offering. Oracle want to charge other coders for using their API code.

If end-users are forced to pay for accessing APIs, it would be like putting a toll system throughout the national road infrastructure: something that hitherto was largely free at point of use could end up being very expensive for users.

At the granular level APIs allow communication between different programmes.

It sits between two applications, facilitating communication between them and crucially, for the action to flow seamlessly, as if they were programmes in the same software suite.

This is important commercially at the enterprise level as well: it allows smaller apps created by start-ups to “piggyback” on behemoth applications like Google Maps for example.

The smaller apps could be eCommerce engines or e Shops using web services provided by Google or Facebook.

It’s useful to think of an API as a window allowing public access to a programme’s code but it’s an active agent too: it restricts access to only the code that the other app needs. 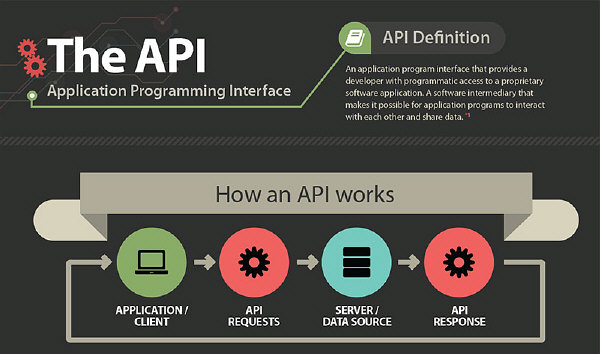 This at once makes the interoperability between both apps efficient, because the later doesn’t have to search for the code and, at the same time provides security for the former programme by restricting access to its commercially sensitive and very possibly copyrighted code.

APIs can enable applications to operate on any platform, with data flowing unimpeded through an integrated infrastructure.

It makes software products much more saleable if they can be used on virtually any platform, anywhere.

This is very similar to the process of globalisation that started in the finance Industry in the 1980s (this is what “Globalisation” originally meant): national financial systems were integrated across the developed world enabling capital and investment to flow anywhere to meet demand.

So companies selling financial products could trade globally as well as trading efficiently and cheaply. Essential to this was the removal of barriers to entering financial systems whether those barriers were regulatory, technological or financial tariffs.

In the same way APIs are crucial to tech companies exporting their product to global markets and to customers who are using different platforms.

This is what makes the US Supreme court decision so problematic: if the cost of using APIs increases this will create cost barriers to users accessing different platforms.

But Oracle’s argument is that by defending intellectual property rights they are defending innovation and creativity in the software industry. If developers can’t benefit from the full market value of their code then why would they code in the first place; there’s no incentive.

But, contrary to Oracle’s position, other big tech companies have joined the open source movement. Recently, Facebook made its code open to the public.

In the opensource world there’s no shortage of coders freely contributing to software projects and debugging applications.

Enhancing professional reputation is one incentive. Another was outlined by a group of software developers who filed an Amicus Brief (this is a third party submission in a court hearing) in the last round of Google V Oracle in the US Supreme Court.

They said that software companies, whether start-ups or firms already operating in the market, rely on “the open nature of APIs and the programs built on them to create and operate new software”.

So APIs are indispensable to an industry that has to continually create new software or improve current products.

Oracle’s case seems to be a minority in the tech world but nonetheless it carried the day last May in court.  But even with the backing of America’s highest court it’s difficult to see how the decision can prevail long-term when so many are open source partisans.