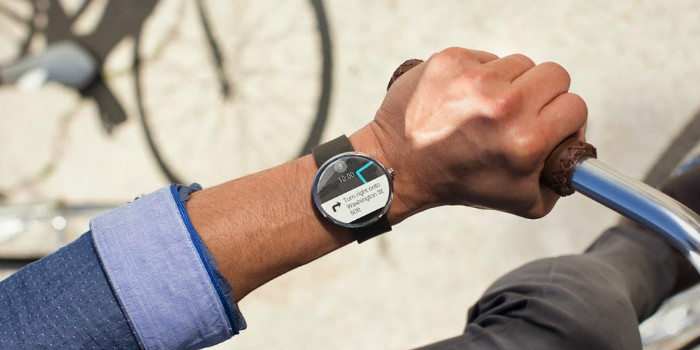 Since the advent of the personal computer we’ve come to expect a linear succession of devices usurping the previous incumbent: Mainframes gave way to PCs which were supplanted by Laptops which again were dethroned by tablets and these are now under threat of obsolescence by Smartphones.

But with wearables Google appears to be dispersing computing power all over the user’s person: Google Glass will work with Android Wear, which will sync with Android Smartphones and the possibility other types of wearables is still in development.

As well as the obvious – being very mobile – wearables will be ultra convenient; placed at strategic positions for instant and intuitive access, like Android Wear which is worn on the wrist. This technology will not only allow data flow but it will learn from your habits and like all good service providers, anticipate your needs.

“…Not having to fumble into your pocket or remember which room you left the phone in means that you could theoretically ramp up to a new level of convenience — if the interface actually works in the real world, of course.”

Android Wear was launched this summer at the Google I/O on 25th June. It’s a Google platform for a new range of Smartwatches:  the LG G Watch, Motorola Moto 360 and Samsung Gear Live. Wear also incorporates the personal assistant functionality of Google Now and extends it to wearable technology. It comes with a library of social, messaging and other apps accessed via the Google app store. Its voice recognition is triggered by the user saying “OK Google”; this service provides information or executes tasks like calling a taxi or sending a text message. It also allows you to monitor vital signs in your metabolism and physiology.

An innovative feature of Wear is that it can act as a kind of master device to control other devices from Smartphones to digital TVs: you can manage your music and movies without having to leave your seat or do much of anything at all other than flick and tap the successive screens on Android Wearable.

Google aren’t launching this just because it’s a cool idea. There is solid economic reasoning behind Smartwatches. Business Insider forecasts a $9.2 billion Smartwatch market by 2018. Their consumer research shows that as of 29th April this year a majority – 55% –  of consumers in the US still wear watches even after the successful mass penetration of Smartphones into the consumer market.

So this is still a huge opportunity and the offer of an upgraded watch with internet connection and smart apps will certainly attract some consumers back to wearing watches.

Before Android Wear, according to Business Insider, much of the wrist wearable market was taken up by fitness bracelets that monitored health and metabolism. In the era of the big data revolution in health care this will be a cluster of  expanding opportunities for Smartwatches and Android Wear.

In future big data and cloud computing will work with wearable devices to monitor the vital signs of people at risk from heart attacks and strokes: the objective is to identify metabolic abnormalities that herald strokes and heart problems. If a medical team can get to someone like this days before it happens they can save lives.

In the PC revolution the goal was to have everything from your office to personal media packed away in the one box. However with the mobility revolution and the digitisation of everything in the Internet of Things, computing is becoming fragmented. The TV on the wall has already become a computer, your smartphone will become an indispensable computing device as will your tablet, but then with RFID technology and gateway solutions at home and even around your home city, computing will be ubiquitous.

You’ll need a convenient master device that will talk to them, control them and receive messages from them. What could be a more intuitive device than a watch to do this?

However, as with all brand new technologies there are problems, mainly with compatability. The new Android Wearable only works with about 25% of  devices using Android platforms; these are Jelly Bean (version 4.3 only) and KitKat version 4.4, it won’t work with anything older.

This excludes approximately 73% of all devices in the Android family. As the graphic below from Developer.android.com shows. If someone has an older version of the OS they’ll have to upgrade.

The future will mean chips with everything. And if watches with technology like the Android Wear become powerful then they can be crucial in managing this digitised physical world as well as the expanding virtual world.

It might never become a device that provides entertainment like a tablet or even digitised TV but then with the development of holographic technology the limited screen size of the Smartwatch will be overcome and Android Wear could come into its own.