Augmented Reality is emerging as a strong contender for “The Next Big Thing”. In a report released last month Digi-Capital, a technology consultancy, revealed that there were 6 straight quarters of growth of investment in AR and Virtual Reality equity with $ ¼ billion invested in AR/VR in the last quarter of 2015 alone.

Digi-Capital believes the mid-term forecasts are even rosier: last summer their company blog said: “VR/AR in 2015 feels a bit like the smartphone market before the iPhone” and “AR has the potential to play the same role in our lives as mobile phones with hundreds of millions of users”.

It also predicts AR, just like Smartphone technology, could have all sorts of uses which have as yet not been thought of. New technologies like AR commercial platforms, for example, or “aCommerce” offer opportunities to advertisers and inevitably drive innovation at the enterprise level.

They forecast the emerging Virtual Reality/Augmented Reality industry will generate $120Bn (€108Bn) by 2020 and the lion’s share of that would come from AR hardware.

It’s little wonder then that Augmented Reality solution provider, DAQRI, is in accelerated growth mode. On 1st March this year it announced the acquisition of 1066 Labs, a tech company that manufactures transparent components for head mounted devices. And in June last year DAQRI announced it was scaling its global operation and by setting up its European HQs in Sir John Rogerson’s Quay on the Liffey.

All this in the wake of a $15m investment round in 2013. The AR company was founded in 2010 and it’s currently based in San Francisco.

DAQRI’s new Dublin centre is headed up by Co-founder & VP DAQRI International, Gaia Dempsey. She’s originally from the US and is driving the organisation’s global expansion. The DAQRI international office wants to reach an eventual headcount of 30 software and hardware professionals. 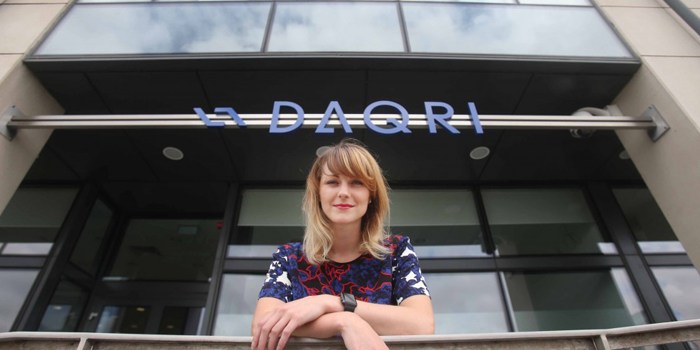 Their latest product, the DAQRI Smart Helmet™ (DSH) was introduced to the tech world in Las Vegas at the start of this year. The DSH uses a 6th Gen Intel® Core™ m7 processor and Intel® RealSense™ technology combined with DAQRI’s Intellitrack™ which provides the wearer with tracking and display information. The solution also offers location information so the wearer will know where they are onsite.

According to the Tech Crunch video report on DAQRI embedded below , the helmet has 4 cameras mounted front and back, giving a 360 surround vision. These cameras combined with a high def depth sensor embedded in the frame create a virtual representation of the wearer’s surroundings on the visor screen.  This flows into a 3D map of the space they are moving through.

The 3D map also gives a control room or supervisor visibility on exactly what the wearer is seeing. Another DSH feature is thermal vision; this has an important safety application because workers can identify hot objects by sight which could otherwise cause severe burns if touched.

The DSH has a growing range of applications. One use is providing field workers all the data from the operational control room.

Manufacturing and other complex industrial processes have a control or command centre where all operational data can be stored. The DAQRI helmet can provide workers out in the field or working at a remote location in a large plant access to that information on the visor screen. Crucially, it leaves their hands free to get on with the immediate task.

The solution can also be used by off-site workers who are delivering services in the field. It can provide remote instruction and support from supervisory staff; this is delivered audibly and as information displayed on the visor screen.

The potential of AR wearables is to offer all the advantages of the Smartphone from internet access to phone calls but keeping the user’s hands free. This is mobile technology with maximum convenience.