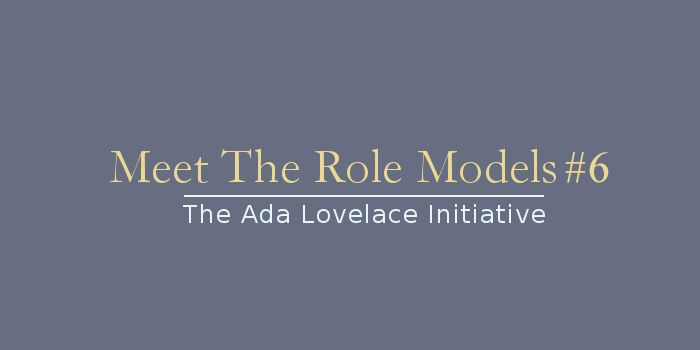 Meet The Role Models is a technology community series which highlights the stories of The Ada Lovelace Initiative role models. The A.L.I. role models are volunteers from the technology industry who have committed to visit secondary schools across Ireland to promote technology careers to pupils. This series features interviews with a diverse range of technology professionals, from a variety of role types from over 75 companies in Ireland.

The Ada Lovelace Initiative depends on the participation of female role models to visit pupils nationwide and we would like to offer you the opportunity to now get to know the women who are helping to make this happen. Last week we had the opportunity to speak to Sona Harrison, UI/UX Designer with Tapadoo, the leading mobile app development company based here in Dublin, Ireland.

Today’s interview is the sixth instalment of Meet The Role Models and we would like to introduce you now to Karen Bollard who is a Group Project Manager with One4all, the multi-store gift card brand based here in Dublin, Ireland.  Karen visited two groups of pupils in Santa Sabina Secondary School in Sutton this term to share her story as a role model.

Hi Karen! How would you describe your current role?

I deliver technical, business and procedural change, manage risk and solve problems of every kind, using only my own inherent abilities and a huge dollop of common sense: no I’m not Superwoman, I’m a project manager.

It’s difficult to describe my role as my day-to-day activities are so varied. If I had to summarise it in a single sentence it would be: “Project management is all about communication, variation and teamwork”.

I currently work for One4all – the giftcard specialists. During my talk at Santa Sabina Secondary School, the girls mentioned that One4all is not a company they would normally associate with technology. However, I explained to them that almost every business today runs on technology even if it’s not obvious to outsiders. At One4all we have a network of computers and servers, multiple websites, multiple databases and numerous systems to securely manage payments, customer orders, customer service, customer and supplier accounts, payroll etc. All of which, need to be backed-up, kept up-to-date and be able to interact with each other seamlessly.

Not all of these changes are classified as ‘projects’. Most (thankfully) are part of the day-to-day work of our IT department but anything that is brand-new to One4all or impacts multiple departments across the company or external stakeholders is classed as a ‘project’ and then it is my responsibility to ensure that everyone gets what they need without adversely affecting all other parts of the business.

Like many people I didn’t set out to do what I currently do – I really wanted to stress this to the girls that the decisions they make now don’t have to be the be-all-and-end-all of their careers, that things do change and nothing has to be set in stone at this early stage. I wanted to let them know that they could try out a few things and find something that they really enjoyed doing.

In my particular case it was the buzz I got after successfully organising a European Science-Fiction convention at only 6 weeks notice, that got me interested in project management.

There’s a lot I like about my work: the thrill of the challenge, the satisfaction of solving a problem or issue, the variety (every project is different and there are new things to learn) and the great sense of accomplishment when you deliver what you promised. But the thing I enjoy most is the teamwork and interaction with everyone involved.

People who watch ‘The Apprentice’ have a very skewed view of what a project manager is! It’s not all about bossing people around and making the best sales but more about ensuring you know what your customer wants, careful planning and consideration, people skills and the application of general common sense.

I do believe however that there are certainly misconceptions about IT and Tech in general. People still have the idea in their heads of the ‘nerd’ in the basement with no social interaction throughout the day. And whilst some people really enjoy having the peace to focus on what they’re most interested in, it doesn’t have to be like that. In fact IT takes all sorts.

I would really have appreciated a similar talk/advice when I was at school as it can be a confusing time trying to decide what to do for the rest of your life and what subjects to pick for your career of choice. Practical advice about the workplace and what to really expect would have been very welcome.

How would you describe your school visit for A.L.I.?

The main focus of my talk was that IT takes all sorts and that the stereotype about the introvert sitting alone in the basement/their cubicle wasn’t necessarily true – that you could just BE YOURSELF. Near the beginning of my session I described myself as a child and later I described the main responsibilities/activities of a PM and I tied them together at the end – for example:

At the end there were a lot of questions about what subjects to take for the Leaving Cert and again I could describe the broad spectrum of technology jobs eg. Art is helpful if you want to get into games/graphic design, English or other languages are good too – programmers need to understand language and syntax and yes, Physics or (Applied) Maths are an advantage if you want to go into hardware design.

Initially I was worried about pitching the presentation to teenagers (who are not my usual audience) but it seemed to go down well – at least the girls laughed where I expected them to! However, I had the luxury of road-testing it: we had a transition year student in with us for a week on work experience and she gave me some great feedback about what was good and what bits were unclear to her. Róisín from Verify also gave some straight forward but very useful feedback.

Now that you have completed your school visit, would you have any tips for other role models?

A.L.I. role model Paula from Udemy suggested having some engagement questions ready and this was was very useful. I asked a few like ‘did anything you hear surprise you?’, ‘would you be interested in my job?’, ‘what changed your mind?’, ‘what did you enjoy or not?’ etc. In fact at the start of the presentation I asked the girls if any of them were seriously considering a career in technology (5 in the first group and 0 in the second – boy did I have my work cut out for me!) and just before the Q&A session I asked again if any of them would now consider a career in tech (15 in the first group and 13 in the second group), so at least I know that I had some impact!

I took A.L.I. role model Fiona’s advice and brought some branded goodies (keyrings and shopping bags) to raffle off at the end. These went down a treat – with the girls asking if my ‘goodie bags’ were actually full of goodies! To encourage attention and participation I also had two (one per group) *star* prizes (portable mobile phone chargers) to give away for the best questions at the end. The star prize in session one was ‘what’s the weirdest project you’ve ever delivered?’ (and the answer to that is a European science-fiction convention!) 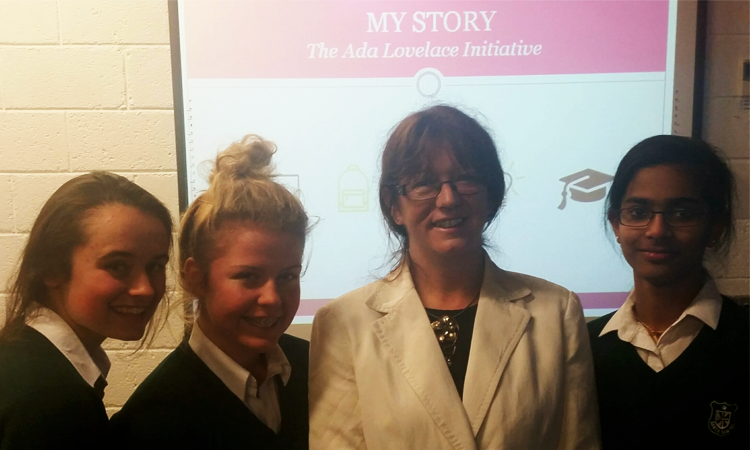 Overall I really enjoyed the experience and would do it again.

I’ve always greatly admired Mary Robinson. Her landslide victory in what had previously been a male dominated domain showed the country (and later the world) that women can excel in whatever field they choose. That particular election was my first official chance to vote (now I’m showing my age) and it really made me feel empowered and that anything was possible.

Thanks again to Karen Bollard for sharing her story for our new role model series and for visiting the pupils of Santa Sabina Secondary School! If you would like to learn more about The Ada Lovelace Initiative, please visit our A.L.I page. We are looking for role models from every county, if you would like more information about visiting a school on our waiting list, please fill out our form here and we will be in touch shortly. On Twitter? Follow @VerifyCommunity for more community updates and tag us with #alimystory