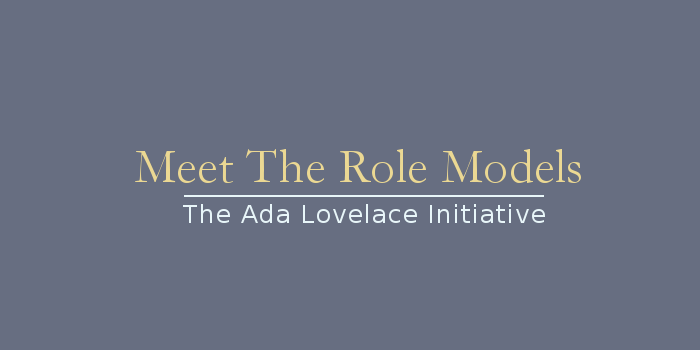 Meet The Role Models is a new community series which will highlight the stories of The Ada Lovelace Initiative role models. A.L.I. role models are volunteers from the technology industry who have committed to visiting schools to promote technology careers to pupils. This series will feature a diverse range of role models, from a variety of role types from over 75 companies in Ireland.

The Ada Lovelace Initiative depends on the participation of female role models nationwide and we would like to offer you the opportunity to now get to know the women who are helping to make this happen. Today’s interview is the first installment of our new Meet The Role Models series  and we would like to introduce you now to Ursula Clarke Everett who is the Technical Lead with the CoderDojo Foundation. Hi Ursula, how would you describe your current role?

I am the Technical Lead for the CoderDojo Foundation. The Foundation was set up to support Dojos (coding clubs) around the world. I look after everything technical for the Foundation, and I’m the only technical employee at present! I look after three websites – our open source project, Zen, our main news website and Kata (our community wiki). My main focus is the open source project. I project manage this and contribute code and documentation. I make any technical decisions and give technical advice and support to the Foundation. I also oversee writing of technical content for Dojos around the world.

I didn’t really think about coding or technology as a career until my family encouraged me to keep working at it. I was doing freelance coding in my spare time when it was suggested that I go back to college to study Computer Science. I really enjoyed it so decided it was time to make that hobby into a career!

I love the variety in my job. I could be doing some server administration, coding, writing a document, or speaking at an event for CoderDojo. Sometimes we run pop-up Dojos at events and I tutor youths at them. It’s also very satisfying to launch a new feature that you had input into, or write a tutorial on coding, and see it being used worldwide.

I think that a lot of people think a Lead only tells people what to do. This isn’t true, there is a lot of work involved in planning a system feature for example, or making a heavy decision about why to use a certain technology. It’s important for teams to have leaders. I also think that a lot is expected of technical people, and most people don’t understand how much work and code is involved in making even a small feature.

I had quite a hard time in secondary school! I wasn’t very popular and I had zero confidence in myself! I wanted to show the girls that being the quirkiest person in the class is a good thing because it means you have a unique way of seeing things that can change the world for the better. I wanted to prove that when you grow up you can be successful even if you don’t feel like it now!

How would you describe your school visit for A.L.I. – My Story?

I really enjoyed sharing my story. The questions that the girls asked were very interesting, and I think they had a genuine curiosity about coding! One question they asked me was, have you ever hacked anything? I explained the difference between white hat and black hat hacking, and noted Facebook’s reward scheme if you manage to show a security flaw in their system! I said I’d only do white hat hacking!

I actually had a great example for this – one time I wanted to buy a dress on a UK website but they insisted you entered a postcode and I was trying to enter N/A for Ireland. I explained that usually entering five zeros bypasses this. I managed to bypass it by hacking at the JavaScript on the site. I mailed them afterward to explain the issue. The pupils seemed to be pretty amused by this scenario! I’d love to do something like this again, in fact I’m already lined up to speak at another school in a few weeks!

I was a little nervous beforehand because I didn’t know how teens would react to a talk about working in technology. I was surprised to hear how many questions they had at the end. There were more questions than I thought there would be and the discussion was very healthy! I came away with hope that our future generation will go into the careers that they need to so they can help the planet to the best of their ability.

Now that you have completed your school visit, would you have any tips for other role models?

Tell them something unusual about yourself, show them your individual traits and they will identify with this! I think a lot of young people think they are the only person in the world who is different when the reality is that we are all different, and we need to celebrate this!

I’m a big fan of Emma Watson, she is a great pioneer for professional women everywhere. She is also a big advocate of Fair Trade and ethical fashion which I love!

Thanks again to Ursula for sharing her story for our new role model series. If you would like to learn more about The Ada Lovelace Initiative, please visit our A.L.I page. We are looking for role models from every county, if you would like more information about visiting a school on our waiting list, please fill out our form here and we will be in touch shortly. On Twitter? Follow @VerifyCommunity for more community updates and tag us with #alimystory