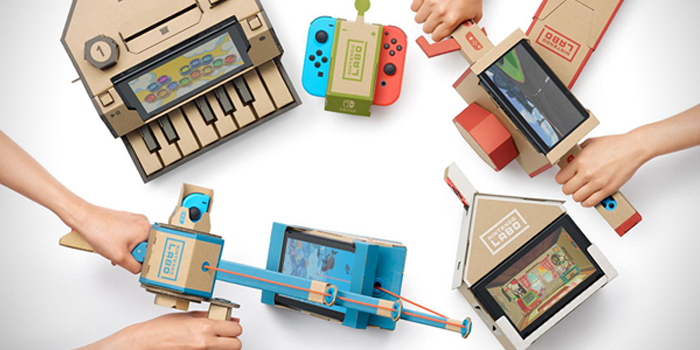 As we move through 2018, the gamers among us will note that 2017 was widely acknowledged as a somewhat underwhelming year for innovation in the market. Uprated versions of the PS4 and Xbox One, while intriguing, boasted little of interest beyond subtle hardware improvements. Similarly, adoption of the rather excellent PlayStation VR remained somewhat of an afterthought, with many titles such as Gran Turismo: Sport and Resident Evil: Biohazard tacking on these astounding capabilities as little more than an alternative to camera controls, thereby feeling less like a groundbreaking advance and more like a technological curiosity, much in the vein of mid 2000’s 3D conversion cinema releases and jump-scare horror. Whilst Sony and Microsoft plugged away at pushing their hardware, the third participant in the console wars, Nintendo, whilst successfully marketing miniaturised anthology hardware in the NES and SNES Classic consoles, was truly the one to watch; looking to innovate through ingenuity and refinement of ideas and concepts, rather than technical specifications.

Not since the early 1990s have Mario & Co been at the cutting edge of hardware capabilities. The Nintendo 64 architecture was capable but found itself left in the comparative dust by the slightly spiteful offspring of their doomed CD-ROM accessory collaboration with Sony, the PSX, or PlayStation. The GameCube’s foray into four native controller slots and a strong library was similarly left handicapped by the use of MiniDVDs and acclaimed system linkage with the handheld Game Boy Advance, as well as localised network functionality, were both similarly underdeveloped and only available through expensive accessories. Already doomed to playing catch-up, the Nintendo Revolution previewed motion controls, a step beyond the gamepad blueprint defined by the N64. These innovations later arrived to incredible sales with the Nintendo Wii console hoping to integrate gaming generations, and bring them to the attention of the passive gamer. As such, the lower-specced system architecture did not lend itself to the demands of annual blockbuster franchise entries, such as those of FIFA or Call of Duty particularly well, indeed neither did the motion controllers themselves. Such a specific set of parameters, even with the lowered cost of development kits, led most AAA publishers safely back to the embrace of Sony and Microsoft. However, some studios, as well as internal developers in Nintendo, were willing to take the gamble, hinging system success on established in-house legacy titles and on innovative, stripped-down mechanics in admittedly limited external titles. It proved a roaring success, as the Wii sold in excess of 100m systems, but was often criticised for relying too much on established properties and masking a lack of technological capability with a somewhat anachronistic approach to their in-house games’ presentation. This, however, could certainly be argued as one of the core strengths of Nintendo, making the issue of retrofitting game mechanics into contemporary releases using established narratives and arcs as a vehicle for innovative technological development adoption, as demonstrated from a hardware perspective with the Wii, is indeed a true double-edged (Master) sword.

Indeed, following the lacklustre launch and disappointing life of the ill-fated and mishandled Wii U, Nintendo, keen to satisfy both their lifelong fans and the casual gamer market they had brought to the table in droves two generations earlier, the century-old Japanese firm opted to refine their existing concepts and merge them into a slimmer, more portable form factor, thereby creating the hybrid home/on-the-go console the Wii U always dreamed of being.  The Switch was launched to much aplomb and applause in March 2017, and his since then has handily passed the lifetime sales figures of its predecessor, selling nearly 15m console units and in excess of 52m software units from April to December of last year, with the three most popular titles hailing from the long-established and beloved Mario, Zelda, and Mario Kart franchises. By choosing to focus on the strengths of the Wii U in designing and, crucially, marketing its successor, the Switch drove Nintendo to its most profitable quarter since 2009, raising their operating profit forecast for the year to the end of March 2018 to the equivalent of £1bn, notably also in the wake of their share value doubling since launch. However, ever the innovators, Nintendo are acutely aware of the necessity to mitigate future sales performance of their seventh home console. Tatsumi Kimishima, President of Nintendo, duly has the casual audience who proved so pivotal in the success of the Wii in his cross-hairs. Speaking at the company’s recent fiscal report Q&A session, Kimishima noted that: “During our first year, we’ve been fairly successful in selling the Switch to customers who have an interest in video games. From our second year, we have to expand it dramatically to those who don’t play video games that often.”

This statement represents a significant shift in philosophical approach, as while the early establishment of the Wii was predicated almost entirely on casual adoption, the Switch instead focuses on this audience for sustainability. However, rather than focusing on software built around the capabilities of peripherals, Nintendo instead is looking at the physical entity of the controller, or Joy-Con, and how they can be physically used and positioned to enhance the gaming experience.

Enter the Nintendo Labo, due for release in late April, an augmented-reality game which turns user-assembled cardboard models and some strategically placed plastic bands into fully functional toys, amongst them a radio-controlled car, a fishing rod, a piano, a motorbike, a house, and, in what appears to be a retooled tech demo crossed with a Michael Bay film, a mech suit. Build-dependent, the Joy-Cons and the console itself slot into place following completion, with each build taking between 15 minutes and 2 hours, guided along by child-friendly on-screen construction guides, whilst concurrently showing and explaining what each component of the console used is doing at that time, thereby making the engineering and ingenuity behind them equally as accessible and fascinating as the Toy-Cons being constructed themselves. The use of cardboard as a vehicle for innovation is already pre-established with products such as Google Cardboard, but familiarity doesn’t always negate surprise. Indeed, the announcement of Labo was unexpected and hitherto unknown to all but a handful of internal teams. However, the adoption of cardboard by Nintendo is more logical than one might initially think, according to company director Shinya Takahashi: “I’m sure we surprised everyone with the use of cardboard, but it’s not so far-fetched if you consider how familiar the material is, at least to Japanese people who, from a young age, use it for play and as a material for
creating things such as fancy crafts.”

In doing so, Nintendo has leveraged its history as a toy and card game manufacturer in addressing apparent limitations in Augmented Reality games; refining somewhat detached superimposition-based game mechanics through creative implementation of camera and infrared technology into physical, user-built objects which are enhanced rather than shackled by the physical device itself. In doing so, users are openly invited to engage both creatively and intellectually with the construction and gameplay equally, thereby simultaneously addressing an underscoring concern of many parents; the rationing of screen time and the importance of harnessing and encouraging creativity in children. In doing so, Labo is positioned as a proverbial bridge between video games and active engagement with construction-based toys such as that of Lego, themselves also fusing inherent educational capacities with fundamentals of programming with their brilliant Boost and Mindstorms robots. Just as Lego sees their robots as a way to introduce coding to a young audience beyond their base consumers, Nintendo sees Labo as their way to introduce video games, and indeed the Switch console by proxy, to a casual market outside their core-base through harnessing creativity and actively encouraging collaboration through physical construction. Takahashi notes, indeed, that “by creating an environment where parents and children can play together, and where children can play under adult supervision, we hope to gain even the interest of [parents].” The key here, as with the casual audience brought in by fitness game Wii Fit and pre-packaged anthology Wii Sports a decade previously, is in maintaining the interest of said audience. While Labo will be treated to further developments and builds in the future, so too will Nintendo focus on established franchises, such as Metroid and Yoshi, utilising innovation and creativity as a hook to ensure the continued success of the Switch. Indeed, as Nintendo creative stalwart Shigeru Miyamoto notes, their “ultimate ambition is for a Nintendo Switch to be owned not just by every family, but by every single person.” Lofty aspirations, without question, but if such ambition leads to further outside, or rather inside, the box thinking from the Kyoto company, both the Switch, and us as gamers, are in for a fun ride.