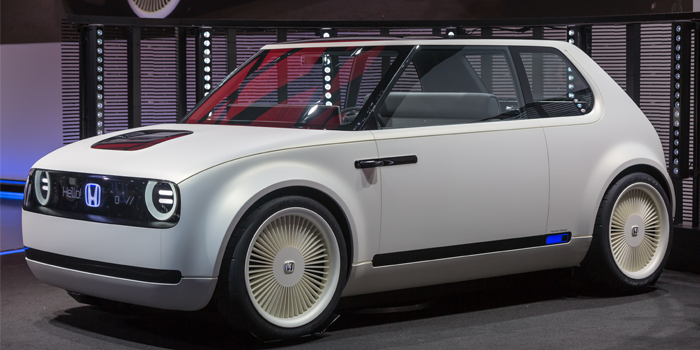 The 88th Annual Geneva Motor Show traditionally heralds the beginning of the vehicle design showcasing season throughout European metropolises, travelling via London, Frankfurt en route to Paris in October. As such, auto manufacturers, depending on their market scope, will often use the premier event to herald the arrival of groundbreaking concept cars, revitalised design languages across their range, or, if you’re Fiat, tell everyone about the cars you won’t be selling in Europe anymore.

The unveiling of new models or indeed design philosophies at such shows has as much of a strategic element to it as it does relative to the individual manufacturers’ projects’ deadlines. Quite often, the advent of a highly-anticipated model can be trumped ahead of time and digitally rendered to reasonably blind accuracy from only passing details and logical design progression, no matter the extent or variety of camouflage used to mask them testing in the wild. As such, in the wake of Volkswagen and Dieselgate, Tesla’s assembly line woes, and worries regarding a bubble based on the rise of PCP finance adoption, Geneva 2018 marks the start of a crucial year of intent for the motor industry: embracing electric power, refining hybrid offerings, and simultaneously balancing the demand for a breed of vehicles for which there is an insufficiently evolved infrastructure to cope with mass adoption, and saving face on fossil fuelled transport in an increasingly environmentally conscious era (the politically tumultuous U.S. market legislatively excluded, for the moment).

Manufacturers in attendance responded; showcasing their visions for the future, revitalising dormant branding with a new definition for the electric era, pinpointing both autonomous integration and all-out passenger experience driven autonomous vehicles, and, for fans of both drone technology and Chitty Chitty Bang Bang, three variants of a long-touted flying car, without a Dick Van Dyke in sight. Perhaps the most telling trend could be found at the stands of luxury and performance manufacturers, those who find their brand status under significant threat from those pesky little upstarts, Tesla. Jaguar unveiled the market-ready e-SUV for July delivery, the I-Pace, designed to capitalise on the buzz and market movement generated by the hugely popular E-Pace and F-Pace SUVs, seeking to firmly establish Jaguar in the electric propulsion space beyond its hybrid model counterparts and Formula E efforts, whilst taking a nice chunk out of Tesla’s prospective order book. Meanwhile, Audi unveiled the e-Tron Quattro, itself looking to bridge the gap for its established customer base and, neatly, undercut the Californian brand’s Model X SUV’s price by over 10% in most regions. The stalwarts of the rich and famous, Bentley (with their Bentayga Hybrid) and Ferrari (with CEO Sergio Marchionne being his bullish, ever-blunt self without having a showcase model), detailed their future hybrid plans, whilst Lamborghini ignored most of that progressive propulsion buzz and instead had journalists waxing lyrical about the Huracán Performante Spyder’s naturally aspirated V10 engine and it’s lovely matte blue livery, whilst a need for sustainability was interpreted as justification for the use of supercapacitors to boost performance delivery from the V12 powered Terzo Millennio concept. The same laissez-faire attitude could not be said of Porsche’s philosophies. Just as other luxury performance-tier firms are catching up with the SUV trend it kicked off 16 years ago with the Cayenne, the Stuttgart group similarly intends to keep an edge in the market, revealing further details on the long-awaited Porsche Mission E, first premiered as a concept at the 2015 Frankfurt Motor Show, now with an expected touchdown date in 2020 for below €100,000, with an anticipated 600bhp twin-motor setup and a mooted “turbo” charging time of 0-80% in 15 minutes, a theoretical real-world range of 500km per full charge cycle, and estimated production capacity of up to 20,000 units per year. As Porsche fettles their project further, so too did Volkswagen by unveiling the latest iteration of their I.D. concepts: the strategically distracting and steering-wheel shy Vizzion. BMW iVision Dynamics also continued their Bavarian barrage of the e-landscape with the i4 saloon, and a convertible version of the strikingly popular i8 coupé, as previously seen in Los Angeles. However, these German heavyweights may not have it all their own way. Another trend on display was that of revitalised legacy brands redefined for a specific market niche, proven successful with the Abarth performance subdivision of FCA in 2007, the return of Renault-backed Alpine in 2017, and the establishment of the DS brand as a sister of Citroen by PSA, sporting especially quirky designs harking back to memories of the iconic hydro-pneumatic DS. Daimler duly both revealed that the Mercedes-Benz-derived Smart city car range would become all-electric in the US market, and simultaneously dusted off the Maybach brand, repurposed for autonomous luxury after their previous S-Class based 57 and 62 models failed to catch fire with the Rolls Royce favoring populace in the mid-2000s. Most strikingly, however, came Aston Martin, and their long-touted revival of the Lagonda badge with the Vision concept, spurred on by CEO Andy Palmer’s delight at the burgeoning success of the RapidE derivation of their luxury saloon, and his desire for the Lagonda brand, still somewhat dogged by the eponymous model sold between 1974 and 1990 once dubbed by Time Magazine as a “mechanical catastrophe”, to be the “world’s first zero-emission luxury brand”. One can’t help but imagine what a certain Mr. Musk’s reaction to such a declaration might have been. Perennial design favourites Volvo, however, have opted to repurpose a model designation as a separate brand, with their limited-run Polestar performance badge now a purposeful, independent brand for high-end electric sports cars, beginning with the aptly named (and cleanly beautiful) Polestar One. Passengers, however, were not to be forgotten amid a very speculative and competitive autonomous space. Renault premiered the ride-sharing EZ-GO, while Icona showcased the Nucleus, and Iconiq, an update to their passenger-identifying Seven. Indeed, there was quite the scope across the show for design niches to be defined: the electric “hot-hatch” seems to be gathering momentum with the Renault Zoe R110 and the BMW i3S; while Honda flexed their quirks to full effect with the really rather adorable 1970’s inspired Urban EV city car, which will very unexpectedly go into a global production run with minimal changes in 2019, armed bench seats and all. The road to sustainable motoring was also not lost on tyre manufacturer Goodyear, who unveiled the green (in both colour and environmental impact) Oxygene tyre, capable of converting carbon dioxide to oxygen through active photosynthesis within a moss-like sidewall. As with the city-focused tyre technology, some particularly eyebrow-raising innovations came equally from the realms of what has long been presumed to be science-fiction in practical execution. The long-touted flying car was tackled in some spectacularly diverse ways by Porsche with the Mission 2025, Pal-V with the autogyrous Liberty, and even collaborations between Audi and Airbus were touted, all repurposing the flying car within drone/autonomy derived functions. As indeed Geneva kicks off the season, so too does it stoke the conversation as to the future of motoring in a not-too-distant era which demands sustainability and practicality. On the basis of the models presented here as well as the verbal focus given to both autonomous and electric cars, it would be reasonable to suggest that the establishment of an infrastructure that can handle such mass-market adoption as will indeed be available as spontaneous combustion is forcibly weaned out of the motoring landscape on a production level, is about to become an especially prescient topic. With just 2,800 EVs on Irish roads (as of December 2017), however, the road ahead to emission-free motoring is still a long one.

Looking for more? Check out our previous articles on Autonomous Vehicles 1, 2, 3 and Electric cars.