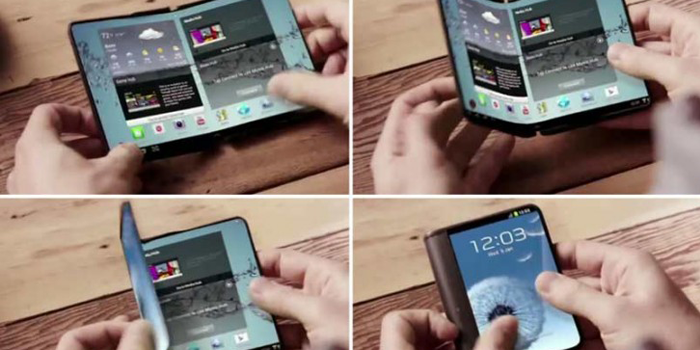 With the confirmation of the Samsung Galaxy X being reasonably close to release last week, much ado has been made of previous rumours and patents allegedly pertaining to said device over the last number of years. This is not exactly new territory for a high-end Samsung device, but coming after the successful re-launch of the Note brand (itself deemed impossible by some analysts after the failure of the Note 7 due to its rather nasty habit of exploding), and buzz following the iPhone X launch as to Samsung’s inevitable response, what may come next could be a step beyond the perpetual game of specification one-upmanship. Instead, if the Galaxy X is indeed revealed as what it is purported to be, it has the potential to place Samsung at the forefront of the marketplace in defining the next revolution in mass adopted device form factor: the foldable screen smartphone.

Indeed, the Galaxy X could be the mass-market culmination of a technology it first premiered at CES in 2011; the flexible OLED screen. They further embellished upon this dynamic change to slate form factor in 2014 by showing a mock commercial for a hybrid, foldable device using a more evolved version of the OLED screen itself. Since then, the prototypes and design language have been fettled to a sleek, dynamic near-final product, capable of withstanding the punishment of even the most demanding users. This is crucial, as bringing a project to market prior to optimisation can be detrimental in the long term in convincing the consumer that such changes are progressive and, most significantly, both essential and highly desirable.

Samsung does not seem too concerned about market failure when it comes to experimental devices; the emphasis on production always seemingly based on “could we” rather than “should we”. A personal favourite of mine was the Galaxy Beam; a fairly ho-hum device released in 2012 based on the Galaxy S Advance. While it’s no powerhouse, the Beam incorporated a 640×360 projector into the (admittedly rather thick) frame. This was a wonderful gimmick but had the rather unfortunate habit of draining the entire device both in terms of processing capabilities and battery life, whilst boasting an OS and specs that looked outdated at launch. This rendered it, at best, a hard sell (I know this particular instance quite well as in my time as an electronics retail manager, we had one of these devices on the shelf for over three years before it finally found a new home). However, the fundamental concept of using a projector in a cellular format was an important experiment, as future AR developments would have mass-market data upon which to base further evolutions in subsequent years.

The Beam was not the only market misstep with experimental feature phones made by Samsung. The Galaxy Round boasted a curved body, but only to a minute extent, with differences largely unnoticeable on a passing glance due to the iterative design language adopted by the handset. However, Samsung is not alone in terms of missteps. Amazon’s much-heralded arrival into the cellular market was greeted with a resounding “meh” with the five camera Fire phone, while Blackberry’s hybrid Storm device failed to bridge the gap between the Android user and their keyboard faithful. Design gambles are forever at the mercy of a highly belligerent and fickle audience who much like the manufacturers can’t second guess their own desires in a market festooned with largely similar products.

As such, notably with regard to devices produced with the intent of mass adoption, this suggests playing safe for a little while longer. However, this is scarcely more than a stopgap, and making the wrong move in terms of design architecture on a large scale can prove fiscally fatal in terms of market share, as the aforementioned Nokia, Motorola, and BlackBerry can attest. With modern consumers willing, if not enthusiastic, to spend upwards of €1000 on handsets that fulfil their needs to what is now a ludicrously high standard, such is the rapid pace of cellular hardware evolution, ticking as many boxes as possible is becoming an increasingly Herculean task. With refinements and improvements predominantly limited in recent years to technical specifications rather than the legacy of feature-based preferences of the pre-slate generation, the gimmicks of old are now the calling cards of the fringe manufacturers, gambling predominantly on perceptions of the future consumer; such as modular customisation and feature prioritisation as seen on the cancelled Project Ara, the sticky polymer-backed “mount anywhere” ZTE Hawkeye, and even, for the radiation conscious, the SoftBank Pantone 5 107SH, with a built-in Geiger counter.

While these devices are very specific to a need, it is true to say that the key to cracking and defining the next mainstream design language pattern will be in addressing a specific issue with the current form factor, rather than specifically any feature-related qualms. The two leading candidates are, indeed, battery life, and durability; the two issues that defined the core popularity of the Nokia 3310 revitalisation, in terms of initial interest. The former is in perpetual limbo until battery technology catches up with the demands placed upon it. The latter, however, is where the excitement and demand for the flexible OLED screen comes in. The prospect of a foldable smartphone wherein no functionality is lost, while tactile elements, primarily size and screen protection are newly defined, is very exciting indeed. As with the return of the candy-bar 3310, the flip phone of new millennium vogue might be about to make a comeback, furthering the burgeoning steps already made by Samsung with the 4G Folder 2.  The combination of an undiluted display both in size and quality coupled with the portability and toughness of a flip phone might just be the next step beyond the contemporary evolutionary cycle of the slate design language.  If indeed mass-market production is possible both physically and financially, the Galaxy X could truly define the next generation of cellular phone form factor.