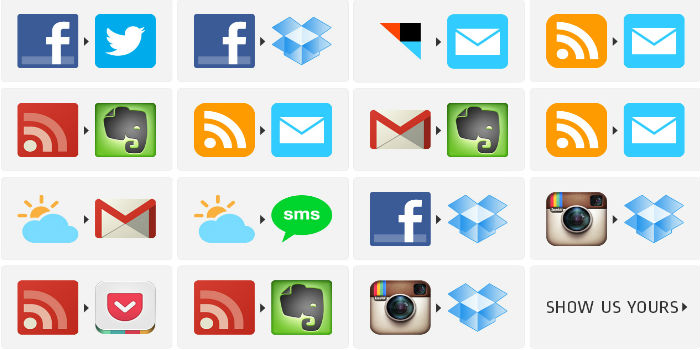 In just about any house this evening it’s a safe bet that the living room will be empty. Each inhabitant will be online in their own private space. This could be a study, a dedicated computer room or just their  bedroom but it will be filled with their own stuff and ordered according to their own preferences.

The irony is that they’ll probably be staring out through a plastic screen onto a virtual world that’s very public, anarchic and overwhelmed by everyone else’s digital noise.

But what if they could create their own virtual space, fill it with their stuff and brand it with something that’s unmistakably theirs.

This is possible using a service called If This, Then That (IFTTT). Essentially, it’s a piece of conditional syntax that can be edited to provide the user with a personalised web or mobile service that’s called a recipe.

When creating “This” in the IFTTT recipe the user needs to choose what IFTTT call a trigger channel, this can be a social media platform or other application like a messaging platform.

IFTTT provides users with a list of their current channels. Once that’s selected the next step is to choose a trigger for that channel. If the channel selected is Facebook then the triggers could be “being tagged on a photo on Facebook”.

After creating the trigger the next step is the “That” section of IFTTT or the action caused by the trigger. Again, the user is offered a list of action channels which in this case could be Dropbox and then just like before the user must choose an channel action like “add a file to Dropbox”.

The number of recipes is big and getting bigger all the time. As well as creating your own recipes you can use ones created by other people. They range from pretty simple ones like adding a twitter user using a predefined hashtag to a list defined under that hashtag or if a WordPress post is updated this will trigger a new link posted on the blog’s fan page. You can get a fuller list by visiting the IFTTT recipe page.

Probably one of the most useful features of IFTTT is that it can automate back-ups. If the user has an RSS feed updating a Pinterest account they can create a recipe that automatically saves any images in the feed to Dropbox.

One of our favourite IFTTT Recipes is the ‘Text to Escape” recipe that allows you to send a text message to yourself allowing you to escape from whomever you are caught up in a conversation with. With over 17,000 downloads, we’re not the only ones who like it! IFTTT’s power lies in its simplicity as the interview with founder, Linden Tibbets, below makes clear. It allows users to re-imagine the internet and increasingly the physical world as well.

In July 2013 IFTTT launched its iPhone app making the service open to people on the go and combined with its recent partnerships with SmartThings and Belkin, If This Then That is now a player in the evolving Internet of Things (IoT), something we discussed last month.

IoT connects physical devices fitted with wireless sensors. They communicate just like servers and storage units do on the current internet. The IoT opens up the possibility of the automation of tasks that we had previously to manage ourselves .

These new hardware partners market the sensors and physical infrastructure that can be used to set up an Internet of Things, the IFTTT iPhone app enables the user to personalise and to maximise the benefit of this automation. Personalisation might include messages alerting you to motion detected in your home or if  someone left a door or window open.

…and the Irish angle this week?

In Ireland, Dublin is ahead of the wave on the IoT according to a report last week in Silicon Republic. Intel is partnering up with Dublin City Council to position 200 of its new “Quark-based Gateway Platforms” throughout the city.

Each of these Gateways can accommodate a total of 6 sensors. The city will lead the world in showcasing this new technology and offer its citizens the first civic IoT.

Providing them with an opportunity to get the most out of services like IFTTT to not only personalise their own domestic network but also have their own personalised civic space.

“We imagine Dublin can serve as a global reference for how these technologies might transform cities.”

Another Irish angle on IFTTT is Kevin Ebaugh. Kevin is the Community Manager with IFTTT and he was recently in Ireland where he tweeted some of his IFTTT recipes. If you are a Twitter fan, perhaps you can create your own recipe whereby you receive Kevin’s tweets via email when he shares a recipe. Kevin has his own recipe page where you can find some of his great recipes.

Another very clever recipe is from Adrian Smith, a Software Engineer from Dublin. Adrian developed his recipe following the demise of Google Reader. And we really like it! Adrian gets an email notification of his favourite blog post pushed directly to his Inbox. It’s a great recipe as an alternative to an aggregator. You can find Adrian’s recipe here.

All this is revolutionising the idea of personal space, which already has enjoyed an accelerated evolution over the last ten years: just sit on public transport and count the number of people wrapped up in their own personal hub or go into a coffee shop and see how the number of tables-for-one have jumped along with WiFi penetration. But there’s one thing as yet beyond the reach of this privatisation of public space and that’s how to shut out all those annoying mobile conversations or the tinny buzz coming out of someone else’s earphones.