Any term that incorporates the word ‘Reality’ usually fails to convey any clarity or definition about what it’s trying to describe. Augmented Reality fails in exactly this way. It in no way describes what this technology actually does!

A mobile device’s camera captures the image of an object in the real world. The on-board object image recognition software will recognise that image and pull in information about the object that will then appear on the device’s screen.

What is Augmented Reality?

A good way of understanding it is to contrast it with Virtual Reality: VR lets the user mimic reality, for example, create a 3D model of a city; Augmented Reality allows the user to overlay content (text, graphics or video) on a real city.

The information displayed can be  a simple text and graphic presentation on the object or it can be more interactive with the option of sending an email enquiry or making a phone call regarding the object. The ultimate augmented reality experience is  a 3D animated advertisement surrounding it.

A basic but incredibly useful application idea for AR is the focus of the smartphone app developed by Word Lens. The object of this software is to recognise printed foreign words captured by the user’s device camera and translated on the screen. It’s designed to work offline so it doesn’t matter what the signal strength is like in your location. However light and legibility of the text is important and as such it doesn’t work as well on handwritten words.

It’s hard to see the limits of its applications: estate agents use AR to give viewers more information about properties they’re selling. The image could be in the agents’ front window or magazine but the AR app in this case would recognise the image and pull up and display on screen information about the property, including a video. If the device was a phone it could display a call to action and enable the viewer to phone the estate agent concerned.

This is certainly an improvement of the old fashioned way of obtaining this information: getting say, the name of the property or name of the company managing its sale, Googling that information and clicking through the search results.

Like all good technology, Augmented Reality takes an established method of doing something, taking out some of the steps and making the process a whole lot easier and quicker. AR makes the tech do more of the work, directly linking the object to the information – it cuts out the search element.

Augmented Reality is Emerging as the Next Big Thing in Digital Marketing.

Irish firm iTagged Mobile Ltd, founded in 2010 by Keith Jordan, uses AR as the core technology in its iTagged product launched on the iTunes store in May of this year. The app uses location services to enable users to share AR content at a specific location. 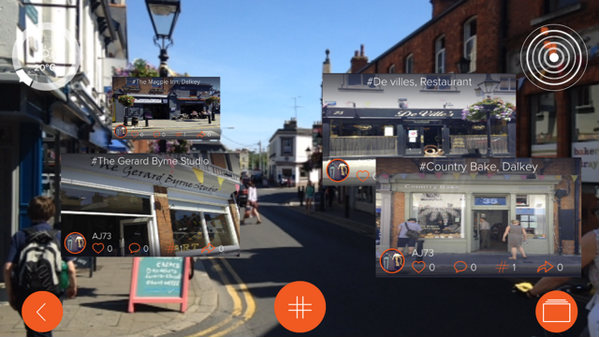 Just like every other AR idea, the applications of this technology are potentially vast: it could be used as a travelling tool where users can find out about a specific tourist destination whether a gallery or a restaurant.

Another iTagged service, hyper local, uses live mapping to enable iTaggers to see what’s been tagged at locations all over the world. iTagged says of their product:

You can even use live mapping to see what’s happening anywhere in the world. Want to know what the surf is like in Sydney right now? No problem. Drop a tag on Bondi Beach – and within minutes you could be chatting live to surfers in the water. Interested in a breaking new story? Tag the location, and you can view other people’s live video content as the story unfolds. The possibilities are endless and only limited only by your imagination.

Another company, vStream, a hi-tech advertising and digital marketing firm is using AR in its work. Working with clients, Jameson International, they combined AR and gamification to create a pub sampling event that involved punters competing against the clock and each other to fulfill a drinks order using AR coded drip mats. The technology is powerful because it allows developers and marketers to create marketing and interactive entertainment for its audience.

Blippar, a US based software company that produces AR enabled platforms, has also combined this technology with gamification. But they’ve moved beyond mobile devices to wearables in their new deployment. Specifically, they’re using Google Glass in their new “Games for Glass” platform. One idea is that looking at a can of Pepsi via Glass could trigger an app that allowed you to score a goal using your eyes to direct a virtual ball or another game could be triggered when you look at the ad on the can that’s using Blippar AR technology. Currently, more than 1000 brands are using Blippar for AR apps. Right now Glass has limited market penetration but wearables will be the future of AR.

The Future of Augmented Reality

The current uses of Augmented Reality are bewildering. A Japanese rapper distributed his latest album at different locations around Japan. Meaning fans had to go to a specified point on a map to listen to  each track via their Smartphone app.

A Flemish Choir has created musical postage stamps where scanning the stamp with your smartphone brings up a video of the choir singing a piece associated with that stamp.

That’s why AR is a dynamic industry that’s going to be big business in the next decade. Tomi Ahonen, a Finnish expert in technology and mass media, reports that in 2013 there were 60 million consumers of AR and predicts that by 2020 the number of consumers of AR  media will pass 1 billion. And in 2013 global revenue for AR was half a billion Dollars.

“AR is not on par with the growth rate of mobile media. AR is ahead of where mobile media was four years in.”

Ahonen calls AR the ‘8th Mass Media’. The other 7 mass media ranging from print right through to mobile. Ahonen is credited as identifying mobile communication as a mass media different from the internet.

AR is currently the preserve of Smartphone apps but its efficacy will be boosted enormously by wearable technology, such as Google Glass. Among other things, one of the obvious benefits is that it leaves the users hands free to interact with the new augmented reality around them. And how this will work can already be seen by Metaio, who are a pioneer and leader in the field of Augmented Reality, with their new Thermal Touch technology.

Thermal Touch is a vision of the near future for wearable computing user interfaces. By fusing information from an infrared and standard camera, nearly any surface can be transformed into a touch screen.

“Everyone is talking about wearable computing eyewear like Google Glass,” said Metaio CTO Peter Meier, “but no one is talking about the best way to actually use those devices. We need natural, convenient interface to navigate the technology of tomorrow, and that’s why we developed ‘Thermal Touch’.”

Consisting of an infrared and standard camera working in tandem and running on a tablet PC, the prototype registers the heat signature left by a person’s finger when touching a surface. Metaio’s AR software then supplements the experience with AR and computer vision to allow the user to interact with digital content in all-new tactile way.